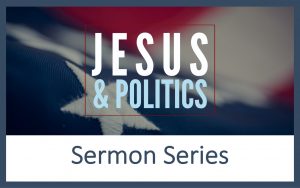 Once more, Americans are bracing themselves for a polarizing election which will leave our country bitterly divided. Complex moral and political issues are only addressed in thirty-second soundbytes. Incendiary Facebook posts and emails containing partial truths will be forwarded by the millions. People who love each other will find their relationships challenged by people who vote differently than they do. At Grace Church, we believe that following Jesus should be the foundation for a better way. As God’s people we are called to be in unity around the Gospel of Jesus Christ. We invite you to join us as we look to Scripture for  timeless solutions for today’s conflicts.

Bring your lawn chairs and masks and worship under the big tree in the parking lot. Come early so you have time to get your spot and set up your chair. We will be doing live music and prayer.

It seems that each new day we find a new reason to be afraid, uncertain, and worried.  These negative emotions impact our joy, contentment, and generosity. God’s Word provides an antidote for living in fear – Thankfulness! Thankfulness is not an occasional act but a lifestyle that reminds us of God’s presence, brings joy to our daily routines, creates contentment, and motivates us to generosity. Join us for this three part series in the lead up to Thanksgiving Holiday.

Share the love of Jesus by filling a shoebox with toys and hygiene items for children in developing countries. You may pick up a pre-printed shoebox or wrap any shoeboxes you have at home (please wrap the lid separately). Please use the label to indicate gender and age. Please also include a $9.00 donation for shipping.

Grace Church is hosting a family pumpkin carving event for Grace Kids and Grace Nursery. We will supply the pumpkins and carving supplies for families that RSVP by October 25th. Each family will be assigned a designated carving area in the church parking lot. Please remember to bring your masks and practice social distancing. Click the link below to sign up. We hope to see you there!

Please join us as we seek to grow our community on Wednesday evenings! There will be a short devotion followed by a time of prayer and discussion in our breakout rooms.

Grace Kids and Grace Nursery are having a family scavenger hunt followed by watching a Halloween movie, “Toy Story of Terror”. This event will take place outside, in the church parking lot. Make sure to bring your camp chairs or a picnic blanket and your mask. Click the link below to sign up. We hope to see you there!

Please come and show your support this Saturday, October 17th for Church Work Day. There is plenty of work to get done - from cleaning, organizing, gardening to painting, there will be something for everyone. For more information, please contact Daniel Na at daniel@gracechurchfremont.org.

Men's BYOB (Bring Your Own Breakfast) - this Saturday, October 17

Calling all men! Bring your breakfast, lawn chair, and mask and hang out with other men from Grace Church.

Please join us TONIGHT October 11 at 6 pm for a night of live worship. We will meet outside in the parking lot, with masks and social distancing, and spaces for those who want to stay in their cars. Please note that this event will not be live-streamed. 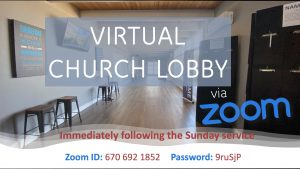 Come say hello to everyone immediately following the Sunday worship service in our Virtual Church Lobby via Zoom. After that, you will be invited to join breakout rooms with 1-2 other people for a short 10-15 minute sharing answering the question, “What was one spiritual thing that stood out to you in today’s service?” We hope to see you there!

Have you ever felt stuck? Emotionally, spiritually, physically? With all that is going on in the world maybe you are feeling that way right now. Your marriage, relationship with your family, and even in your relationship with God – we all find ourselves from time to time asking the questions, “How did I get here?” And more importantly, “How do I get back on track?” If you resonate with these questions, then our new sermon series SNAGGED? is right for you. Join us this Sunday as Pastor Josh wraps up the series. He will guide us through Galatians 5:7 and the process of getting back on track in our lives.

What is better than ice cream? Ice cream and hanging out with church friends! Everyone is invited to come hang out. Please remember to wear your mask when you’re not eating and to keep social distance. We look forward to seeing you!

Calling all men! Bring your breakfast, lawn chair, and mask and hang out with other men from Grace Church. 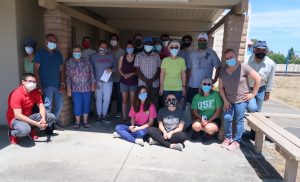 Thank you to all the volunteers who helped with the Spanish Church Grocery Distribution on June 2! Pastor Carlos Grijalva’s wife, Annabelle, wrote of the event:

I had the blessing to be at the welcoming booth and all of them expressed their gratitude for holding this event. I will say that 85% of the families that were given the distribution were Hispanics and most of them let me know that they were still feeling the challenge of still not working or being back to work with reduced hours. Many of them also did ask to keep them informed if another distribution was going to take place in the future.

One of the highlights of the event, was, of course, the volunteers. They were all awesome. They were all so helpful and it was beautiful to see both churches working together to serve others. Some of ladies and girls that helped me with the diaper distribution, learned some Spanish words here and there, after hearing what the families needed. In the beginning, I had to translate for them in regards to the size needed for the diapers, but I will say that towards the middle of the distribution, they all knew the numbers in Spanish.

We also had the blessing of giving a word of encouragement to many and invited them to connect with Grace and Intimidad. My husband and another leader were mostly in the chaplain area and had the blessing of sharing the good news of the Gospel and even praying for some of them.

Thank you all for making this happen! We are so grateful!!!"

Pastor Josh will continue his verse by verse study through the Book of Romans starting with Romans chapter 11. If possible, he would like everyone to read Romans chapters 1-11 in preparation for this series.